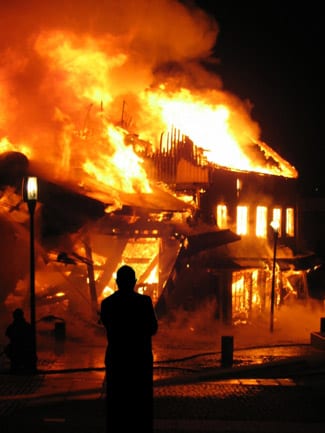 Arson is defined as the willful and malicious burning or charring of property. There are many types of arson crimes, including setting fire to one’s property with fraudulent intent–such as to collect insurance money. While the majority of arson crimes involve damage to buildings, arson can also be committed by a person who sets fire to forest land or a boat. Arson statutes typically classify arson as a felony due to the potential to cause injuries or death.

Arson is investigated by elite law enforcement units using the most advanced chemical analyses to locate the point of origin of a fire. Law enforcement can take months or years to fully investigate before a case is charged. Law enforcement looks at the motivation behind the crime of arson. Arson occurs in domestic violence cases, to hide another crime including murder and for financial gain.

In many instances, people will engage in arson to commit insurance fraud and get quick money. Indeed, a person who sets fire to their own property can face arson charges. For example, assume Alice has a $1 million fire insurance policy on a falling apart building that would be worth half of that if she tried to sell it. If Bob burns the warehouse down and then tries to collect the proceeds of the insurance policy, Bob can be found guilty of both arson and insurance fraud.