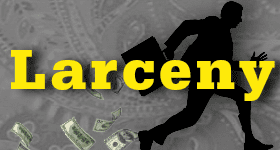 The crime of “theft” has gradually become a catch-all term for all kinds of common-law property crimes, including larceny. Several states and the Model Penal Code organize larceny and certain other property crimes under the classification of theft; other states retain the traditional common-law distinctions, however.

In those other states, larceny remains its own crime, separate from other property crimes such as embezzlement, robbery and the acquisition of property through false pretenses.

Larceny is what most people think of as common theft: it is the taking of someone else’s property without the use of force from a location other than inside their home. Car theft forms a typical instance of larceny. The offense developed under the common law, but most states that still recognize the crime of larceny have codified its elements into their penal code. While each state has its own definition of larceny (or theft), most of them incorporate the following elements in some form.

The Elements of Larceny

In order to support a charge of larceny, the state must prove each element, so it’s important to have an understanding of what they mean, as explained below.

The first stage in a larceny involves the unlawful taking of another’s property. Note that the taking must be unlawful, so the removal or appropriation of property for a lawful purpose will not constitute a larceny.

For example, when a bank legally repossesses a car for nonpayment of the car loans, the taking of the car accomplished a legal purpose, thus there is no larceny.

Some states also require that the taker must carry the property away, but other states have eliminated that requirement in order to broaden the scope of the crime. Certain property is immovable, for example, but as long as the perpetrator has taken control of it and removed its use and enjoyment from the owner, the first element of a larceny is present.

In order for a larceny to occur, the property in question must belong to someone else. If the property belongs to the person taking it, then they have not committed larceny, even if the property was in the possession and control of someone else at the time it was taken.

For example, Adam lends Bob a lawnmower. Bob keeps the lawnmower for longer than Adam wanted him to, so one day while Bob is mowing his lawn, Adam sneaks over, waits until Bob isn’t looking and runs off with the lawnmower. Since the lawnmower belonged to Adam, he hasn’t committed a larceny by taking it back.

People who co-own property can also commit larceny if they deprive their co-owner(s) of their right to the property. Thus, if three friends jointly purchase a computer and one of the friends moves away with the computer without the consent of the other friends, he has committed larceny.

Without the Owner’s Consent

Separate crimes exist to cover situations where the owner approves of the transfer because of the other party’s deceit or fraud, but for the purposes of basic larceny all that matters is that the owner must not give consent to the taking in order for a larceny to occur.

The final element of larceny involves the taker’s intent to permanently deprive the owner of the use and enjoyment of the property. In other words, if the person who took the property intended to give it back eventually, the taking doesn’t amount to larceny.

Larceny is a specific intent crime, which means that the person taking the property must specifically intend to commit larceny there can be no larceny by mistake. In addition to the example above, a person could have a reasonable belief that they own the property they are taking, thus they would not have the specific intent of taking someone else’s property that would be required for a larceny.

States usually separate larceny into different categories based on the value of the item stolen. “Grand” larceny applies to higher-value items, and “petit” (or “petty”) larceny applies to items of lesser value. Each state legislature decides the amount that divides a grand larceny from a petty larceny. For example, one state could make grand larceny apply to larcenies above $2,000, while another state could decide that grand larceny only occurs when the value of the stolen property exceeds $3,000. Anything below those amounts would constitute petit larceny.

States treat some larcenies as felonies, and others as misdemeanors. Again, states can set their own rules for what divides a felony larceny from a misdemeanor.

One Larceny or Several?

A common question that arises in larceny prosecutions is whether one larceny has occurred, or several. Generally, multiple items stolen from the same owner at the same time will form one larceny, but some states either give prosecutors the discretion to, or require that they, charge such a situation as multiple larcenies.

The determination of the number of larcenies affects the number and severity of the larceny charges. For example, if multiple takings form one instance of larceny, the amount of the items taken could push the larceny into the realm of a felony. On the other hand, if the multiple takings each formed a single occurrence of larceny, the defendant may face multiple lesser misdemeanor counts. In the end, this determination could have a great impact on the punishment the defendant receives.